“Life should not be a journey to the grave with the intention of arriving safely in a pretty and well preserved body, but rather to skid in broadside in a cloud of smoke, thoroughly used up, totally worn out, and loudly proclaiming “Wow! What a Ride!”

At the North Carolina end of the Tail of the Dragon stands the Tree of Shame, a tribute of sorts to the bikers who have been bested by the beast. The Dragon: a stretch of US Highway 129 with 318 curves in 11 miles, running from Tabcat Bridge in Tennessee to Deals Gap, NC. The Tree: adorned with fragments of bikes that missed one of those curves, a fender here, a shard of windshield there, poignant words about bikers who sustained more damage than their bikes. 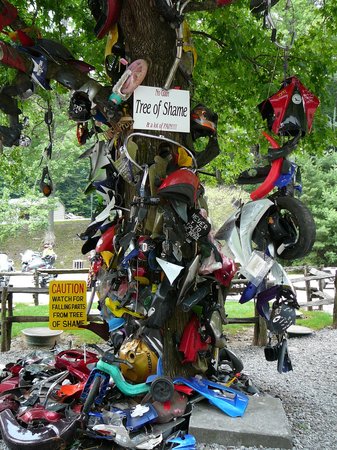 This photo of Tail of the Dragon is courtesy of TripAdvisor

Is it wise to ride The Dragon? It is not really as scary as as The Tree might have you believe. It merely likes to taunt. I won’t let it dissuade me. The better question is “Can I not ride The Dragon?” The sensation of going into a curve on a motorcycle is unique. It can’t be had in a car. And with its 318 curves, The Dragon periodically beckons me to come glide down its twisting form.

And I heed its call. Plus, I guess I’d be described as a prudent rider. No aspirations to break the 9-minute one way record. Not going to literally “skid in broadside in a cloud of smoke” as I ride it. And certainly no interest in adding parts of my beloved S 50 to the tree. Just a steady push to the comfortable edge…oooh those curves!